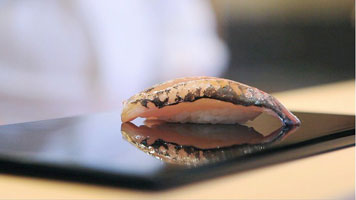 85 year old, Jiro Ono, runs Sukiyabashi Jiro, a tiny ten seat sushi restaurant in a tokyo metro station, who just happens to be regarded as the best sushi joint in the world. It has been granted 3 stars by the Michelin guide, an exceptional cuisine deserving of a “special journey,” and that is precisely where this documentary takes us.

At the age of 9 Jiro ran away from home to become an apprentice at a restaurant. He has been making sushi since, every day of the past 75 years, slowly, painfstakingly, patiently perfecting his craft. With great rigor and persistence, he continues to want to make better sushi, unmoved by old age, Michelin Stars, or his now 50 year old elder son, who patiently waits for his father to retire so he can take over his business and continue his legacy.

More than a film about the best sushi restaurant in the world, Jiro dreams of sushi can be looked at from a number of angles. Japanese society and traditions are explored through the relationship of Jiro to his sons. A tough father, who was never around while they were growing up and who’s only relationship to his sons is expressed through the transmission of his savoir-faire and a number of life lessons:

The film also takes a long deep look at the fish industry in Japan, and by extension the rest of the world. As Yoshikazu bicycles to and from the fish market every morning, he meets with trusted suppliers who specialize in this or that catch: octopus, tuna, wild shrimp… The documentary focuses on the Tuna expert, a sort of anti-establishment tuna dealer, who puts up with only the best products. He is filmed walking through rows of gutted tuna, checking for quality by exploring the red flesh under the light of a torch lamp, and deploring the general lack of quality. The film cuts through to Jiro as he condemns the overfishing of tuna, which will inevitably lead to its disappearance. He is heard musing about the necessity of finding a balance between the demand for tuna and preserving the species.

Ultimately, the film is a defense of hard work, patience and persistence in search of perfection. One can only sublime one’s craft by repeating the same gesture, day in, day out, and aiming only to surpass oneself. Jiro’s apprentices have to go through 10 years of apprenticeship before they can graduate. One of them is filmed recalling how he had to make the preparation for the egg sushi (tamago) more than 200 times before it was good enough for Jiro. Another scene, shows a proud Jiro, describing how he went from massaging the octopus for 20 minutes before serving it to massaging it for 50 minutes before serving it. Every little detail, from the temperature of the rice (which must be served at body temperature) to the way the sushi is placed on the serving plate (differently depending on whether the client is left or right handed) is measured and composed.

All I want is to make better sushi.

Whether you like sushi or not, this film is a fascinating take on someone who has followed his dreams, and succeeded triumphantly. You will be sure to walk out of it with 2 things, amazement at this man’s life achievement and his strife for perfection, as well as a strong craving for really good sushi.

If in Paris, I strongly advise Hyotan. An inconspicuous, family held, Japanese restaurant that will make you feel like you are in Tokyo.

If you are in Beirut, head for Le Sushi bar. Although lacking the authenticity you crave after seeing Jiro dreams of sushi, it is still the best Sushi joint in town.

If in Tokyo, you know were to go. Book at least a month in advance and carry enough cash (minimum of 30,000 Yens per person) as they do not take credit cards.